About me (Claudia Berchtold) 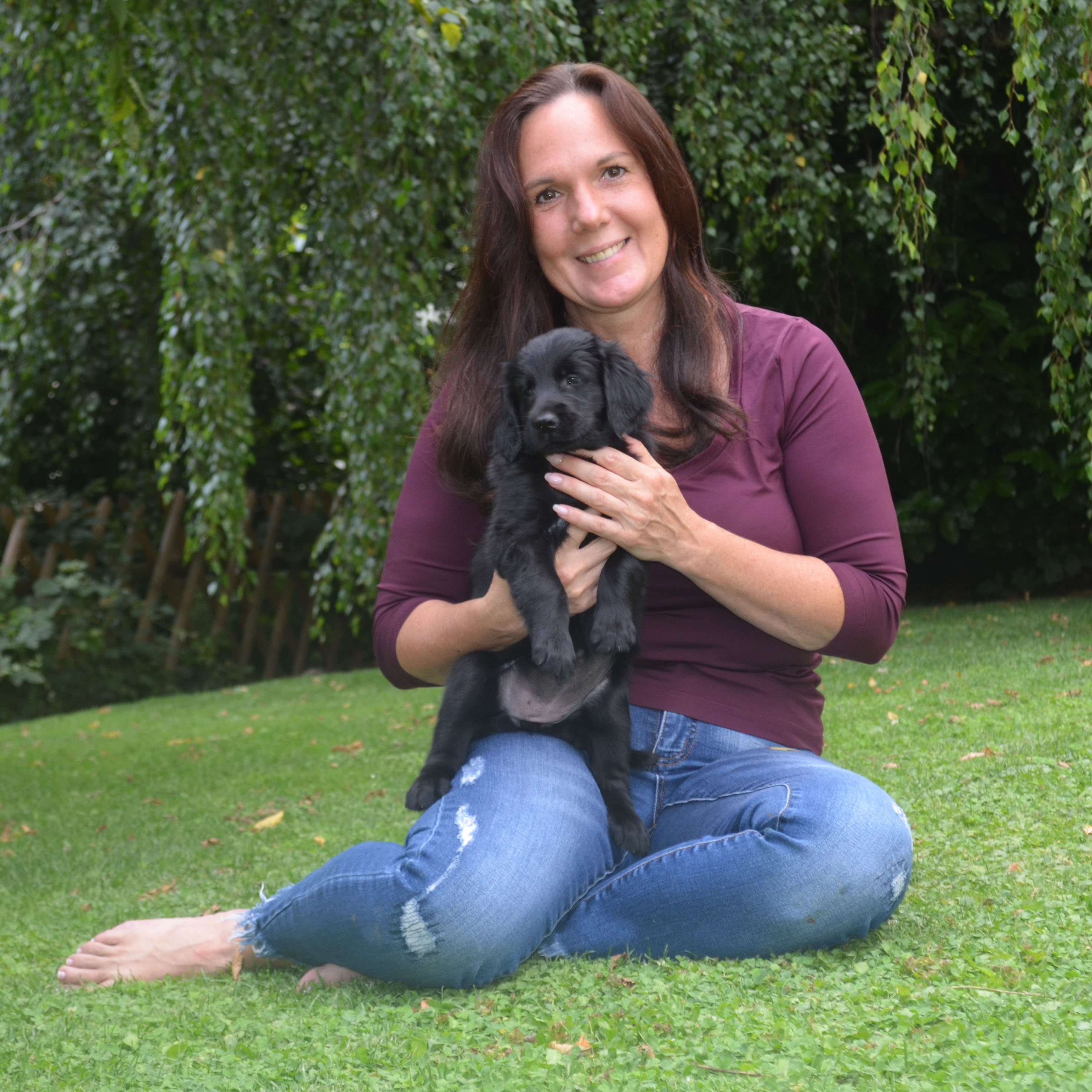 I grew up with dogs but the first dog I really owned (and who definitely owned me) came into my life in 1998 with Flat Coated Retriever Ben „ÖCH ÖVetCH Black Boy of Fridolin’s Flat“. Soon the second dog followed and I made first experiences at dogshows and working trials.I passed my hunting license in 2007 and since then also use my dogs for practical hunting from time to time.
2009 and 2010 I bred my first Flat Coated Retriever litters out of my Swiss foundation bitch „ÖJCH ÖCH Neala’s Diamond Tinkerbell“. Her granddaughter Sheena „ÖCH ÖJCH BJS-14 VDH-ES 15 Funstuff Creamy Vanilla-Latte“ as well as Penny „ÖJCH EUJW-13 BJS-13 VDH-FS-14 CS-14 Caci’s Love-Letter to Vienna“ who rushed into our lives like a storm in 2012 are the base of my breeding stock.

My dogs live with me in the house and so do the puppies of all my litters. My other breeding bitches and studdogs live with friends and I see them regularly. 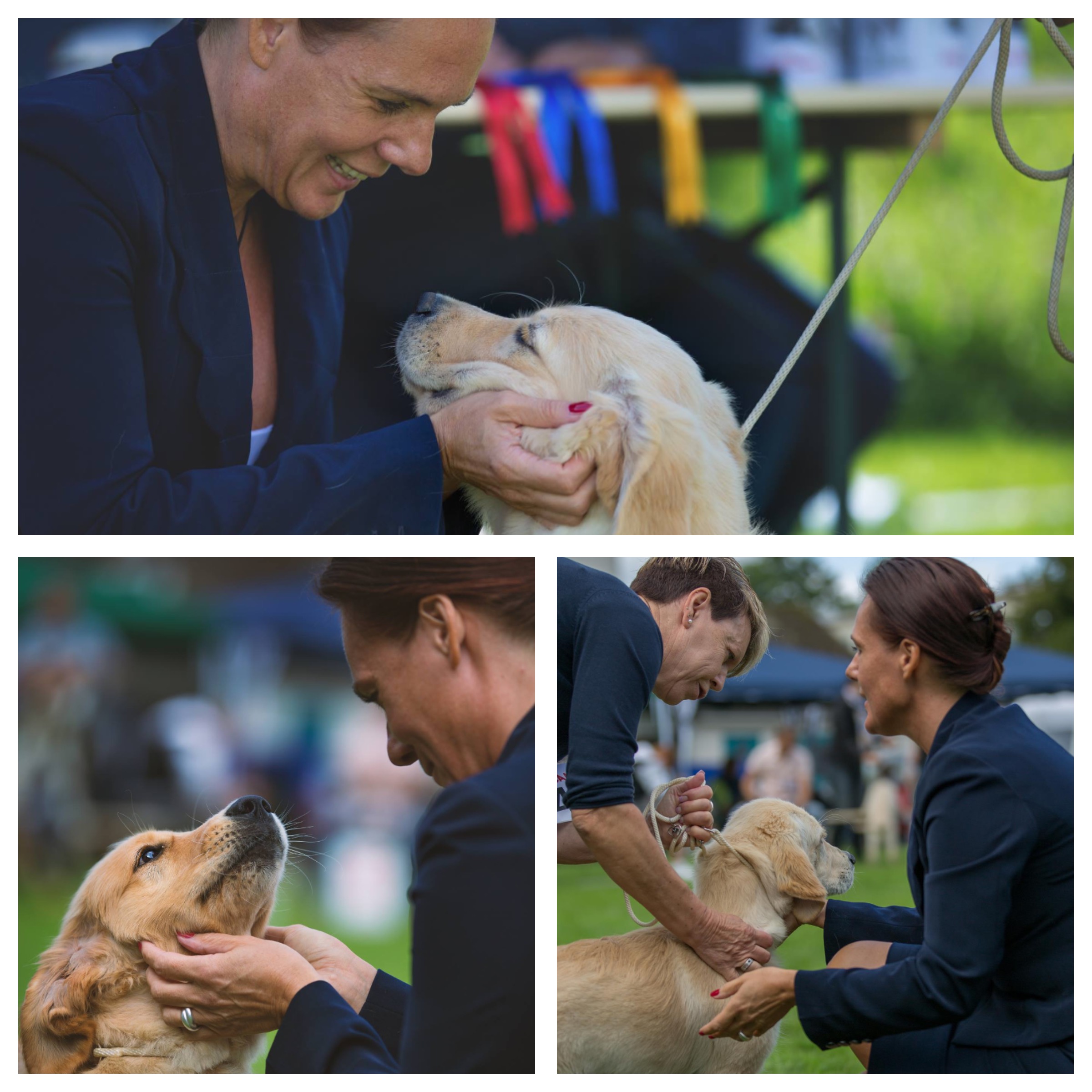 I was member of the committee of the Austrian Retriever Club from 2003 until 2016, first as a Show secretary and from 2006 until 2016 I was responsible for the breeding of Flat Coated-, Chesapeake Bay-, Curly Coated- and Nova Scotia Duck Tolling Retrievers in the Club.

In 2006 I became judge for character and abilities tests for retrievers and in 2011  I became FCI Show judge. I am now entitled to award CACIB  for all breeds in FCI Group VIII and was officially confirmed as an FCI Group VIII-judge by the Austrian Kennel Club (ÖKV) in July 2019. I was lucky to have quite a few invitations to most European countries, as there are: Austria, Switzerland, Germany, France, Italy, Slovenia, Slovakia, Hungary, Czech Republic, Norway, Denmark and Iceland.  In October 2021 I was given the great honour to judge Flat Coated Retrievers at the World Dog Show in Brno.

Before my daughters Nina (2006) and Emma (2010) were born, I worked as  a software supporter and network administrator. Now I work as a CEO in my husband’s company. We own and run 3 bycicle shops in the West of Vienna.

I love showing and working my dogs, I love to live with them as my family pets; but what I love most – actually – is talking and discussing the breed standards and breeding strategies. For me the most important thing in life is to be honest, fair, tolerant and to never stop learning.

Funstuff kennel was founded in 2004, the first litter was born in 2009. Claudia bought a puppy from me in 2010 and from that day on our friendship developed very quickly. I am very happy that she accepted my invitation to run the kennel together from 2018 on. Thank you, Claudia!

About me (Claudia Stark) 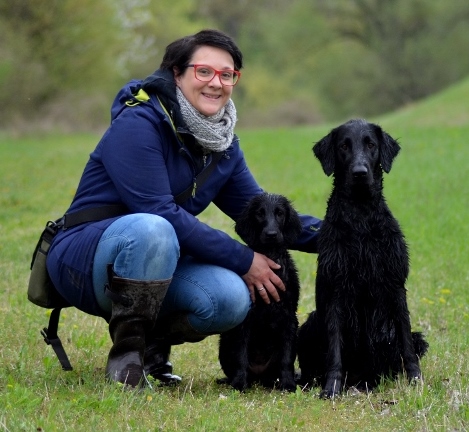 My whole life I was in close contact with dogs. As child I was allowed to walk the dogs of our neighbours. With 18 I got my first own dog. Aiko was a crossbreed and he teached me really a lot. Some years later I was a puppy buyer of Claudia and was very soon totally in love with the Flatcoated Retriever.

My husband Tom and me live in the periphery of Ried im Innkreis. It’s an ideal place for our life with dogs. We have a beautiful surroundings with a lot of water, woods, meadows and space. I love to be out with the dogs for walks, training, bike trips or hiking. We also love our holidays with the dogs at the seaside in Germany, the Netherlands and France.

For me the Flatcoated Retriever is a real dual purpose breed. I really appreciate to live with dogs which are fit for function and able to compete at a dog show. There would be so many experiences with the dogs to speak about. But one of my highlights, next to the gift of sharing daily life with that breed, surely was to win Best of Breed and place 3 in FCI group 8 on one day and pass a hunting test on the other day with Sheena.
I’m really thankful that I’m allowed to be part of Kennel Funstuff and to breed litters with my husband at our home. Thank you Claudia!

We are very lucky to have the support of Christopher and Leni: 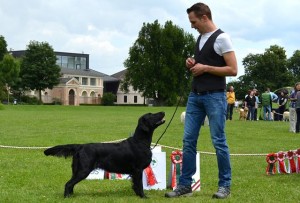 Christopher has been into Retrievers since he was a child and was mentored by the great Ann Woodcock (Stanroph Kennel). I admire his knowledge about standard conformation, his clear view for balance in a dog and the fact that he is (almost) always right. He is a real showman and owns our treasure Penny „ÖJCH EUJW-13 CJS-13 BJS-13 VHD-FS-14 CS-14 Caci’s Love-Letter to Vienna“. He presents her to her best and she won all her titles beeing showed by him. But that’s not all: he is a perfect trainer for shows and working trials and when it comes to grooming the dogs he does it just perfectly.

Thank you Claudia and Christopher for your help, your friendship and for your respect. I truly think that all three of us are the same kind of crazy … And that’s why „Funstuff“ is fun-stuff with you. 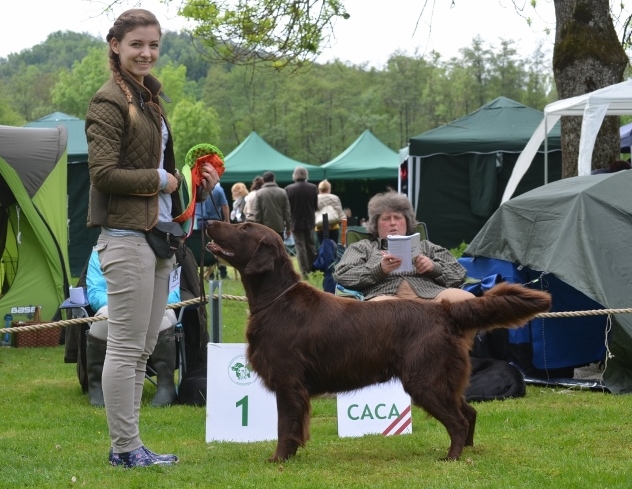 Lena, we call her „Leni“, is the daughter of Ulli and Eberhard, puppy-buyers and friends of our family.

Leni owns and trains her two boys Cooper „ÖJCH CJS-14 BJS-14 Funstuff Cold Cappucino-Latte“ and Flynn „ÖJCH ÖCH CS-13 BS-14 Funstuff Blade Runner“. Both of them won nearly all their titles beeing showed by her. During the last years she developed into a skillful handler of all our dogs if necessary.

She also looks after the puppies from our litters when she has time . Her greatest feature is her calm, always friendly and very polite temper wich is appreciated by both, dogs and humans 🙂